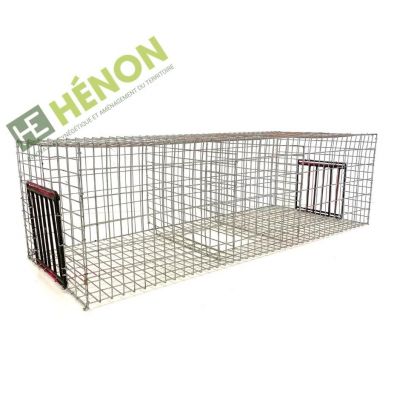 By buying this product you can collect up to 7 points. Your cart will total 7 points that can be converted into a voucher of €1.40.

Trap made to catch pigeons

The pigeon trap cage is an extremely efficient and very easy to use pigeon trap. This type of trap allows you to trap several pigeons at the same time. It is a trap with one-way entrances so a pigeon that has entered can no longer get out. There is not even need to tighten it!

To use this pigeon trap, there are two possibilities. The first one is to already put a pigeon in the trap. The others will be attracted by this new congener and they will try to enter the pigeon trap. But if you don't have a (live) pigeon on hand, you can always attract them by putting wheat in it.

What is the purpose of this trap?

You will have noticed that in the city the pigeon is extremely present. It proliferates and finds everything it needs to develop to such an extent that it has become a "rat with two wings". The pigeon can carry many diseases but the biggest problem remains its droppings that it makes everywhere and even in full flight! Many cities have invested to fight against this plague, but nets will not be able to defeat this bird. The pigeon trap is used to fight against these populations of urban pigeons.

But it is not only in cities that the pigeon is a problem. In agricultural cooperatives, for example, the pigeon gets into the silos to feed on wheat, and in the process these birds dirty the cereals with their droppings. In this case, the pigeon trap is also very suitable and allows to fight against this plague.

Moreover, our pigeon trap is perfectly adapted to the urban landscape. For example, it can be placed on a relatively flat roof in an industrial area. Today, trappers are more and more solicited to participate in the reduction of pigeon populations in cities. In Moselle and especially in Metz, nearly 20,000 pigeons are captured every year, according to the book "The secrets of 100 trapping champions"! This is the proof that trapping and especially trappers have an important utility for the Civil Society!

In any case, the pigeon trap manufactured by the Hénon Establishments is designed to adapt to all environments, but also to last!