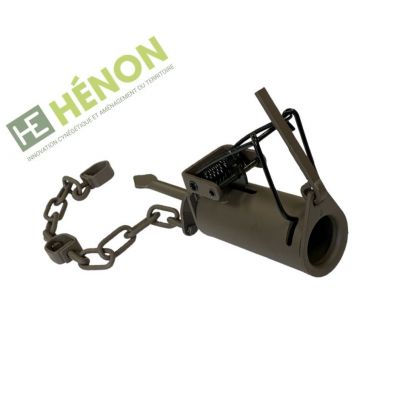 How to use this trap ?

The raccoon trap paw cover is designed to capture raccoons. It allows the animal to be captured by the paw without causing injury.

It is practical due to its compact size and is also more selective than a cage, especially with regard to pets.

The trap has a fully enclosed release mechanism that operates on a "pull" action only. The trapping device is internal to the raccoon pawl trap, the lace does not deform and does not need to be changed.

This trap is particularly effective in areas where the risk of pet capture is high. The raccoon cover trap is highly selective, allowing only raccoons to be targeted.

For bait, it is advisable to use a marshmallow, marshmallow or a sweet and fragrant candy. Avoid using fish as bait to avoid tempting cats. You can use a cap (white or coloured) or a golf ball to close the tube. The raccoon will have no trouble removing the cap to reach the bait and will then be trapped.

Place the bait in the bottom of your raccoon trap with the trigger in the tube in front of the bait. The animal must grasp the trigger and pull it to access the contents of the tube. Only the raccoon has this ability. Thus, it will insert its paw into the tube and be captured at the wrist.

Native to North and Central America, it was accidentally introduced into France by NATO forces, or escaped from animal parks. It is a stocky animal with fairly short legs, a pointed muzzle and a coat that varies from grey to brown. It measures between 60 and 100 centimetres (including the tail) and weighs between 5.5 and 22 kilograms.

Considered a pest in some departments, it causes a lot of damage to maize crops, cultivated fruit, fish and eggs.

The raccoon can be trapped anywhere and all year round.