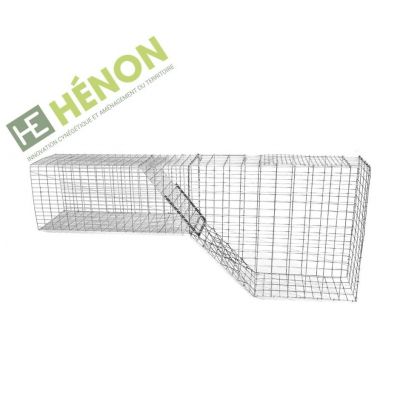 By buying this product you can collect up to 5 points. Your cart will total 5 points that can be converted into a voucher of €1.00.

Presentation of this fox trap :

The fox cage is a fox trap adapted to the capture of young foxes : the cubs. This fox trap is very easy to use and adapts to any environment. It is a sturdy trap made of wire mesh, and designed to resist and last over time. Its operation is simple: upon entering the fox trap, the fox raises a small swinging door that closes directly behind it. It arrives in a compartment and remains trapped there. This operation makes it possible to trap several cubs with a single fox trap. Sometimes a whole nest of cubs can be captured with this fox trap.

Our advices of use :

Tie your trap down tightly:

Be careful, you must remember to "moor" your trap to avoid that an adult fox or another animal moves your fox trap and comes to release the already captured fox cubs. To do this, we advise you to place three wooden stakes around the cage. In this way, your fox trap will stay well in front of the burrow mouth and there is no risk that it will move or turn around.

When to use the fox trap?

The breeding season for red foxes is generally between mid-January and mid-February. Then 51 to 53 days later, the cubs will be born. That is to say that the whelping of the fox is generally between March and May. Fox cubs emerge for the first time from the burrow about four weeks after birth.

Since this fox trap is adapted to fox cubs, it is advisable to use it from April / May. It is also important to know that the cubs grow very fast; and around July, the litter and the female leave the burrow. So the crate can be used from April to July. Then in September and the rest of the year, larger fox cages will be perfectly adapted to trap adult cubs.