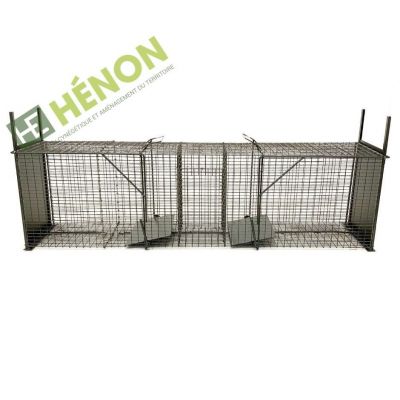 By buying this product you can collect up to 13 points. Your cart will total 13 points that can be converted into a voucher of €2.60.

The difference with the tawny box 30x35x100cm is that there is a compartment in the middle to place a bait or caller without difficulty. Moreover, this cage has two entrances, so you can catch two animals at the same time. Apart from that, there is no real difference with the other tiger boxes: it remains a trap cage.

What is the purpose of this trap cage?

Trap cage, what does it mean again??? A cage trap is a trap that does not kill, the animal is simply captured without any injury. It is also called "beast box" the cage trap. In all cases, there is no need for special authorization, specific training or reporting the authorization of a trap cage. It is a type of trap that is very easy to use and adapts to any environment. You can use a cage trap to trap a weasel or other mustelids, to trap coypu, a fox, a muskrat, a raccoon, a cat and well (to recover it) and many other pests. Like the Jardinet HENON cage, the trap cage is a real Swiss Army Knife !

How to use this falling box ?

Since the tawny box 30x35x130 cm is equipped with a compartment to place a decoy, its use is different from other tawny boxes. A trap cage with decoy is rather made to trap foxes, weasels (and other mustelids) and other rather carnivorous pests. The best way to trap all these pests is to place a decoy in the middle of the trap cage. As a decoy, you can use a bird as a small hen. A rederie hen will fit perfectly in the cage. It will serve as temporary bait to attract the fox or the weasel. Don't worry, the hen, and any bait used will be protected in its decoy compartment. The wire mesh is strong enough and perfectly adapted for the safety of the decoy placed in the trap cage. Remember to feed and water your decoy regularly, and cover it against the rain if it stays outside for a long time.