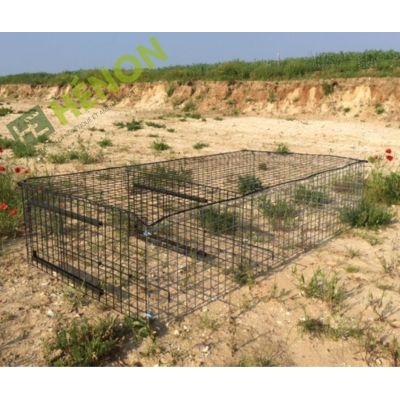 By buying this product you can collect up to 11 points. Your cart will total 11 points that can be converted into a voucher of €2.20.

Equipped with a black polyethylene rope of diameter 3 entirely sewn around the edge of the net, which greatly increases the resistance. Wire diameter: 1.8mm

The partridge pre-release cage can accommodate 10 to 12 partridges.

Equipped with a pre-release airlock, the modular partridge pre-release cage has 2 sliding doors and an aviary net roof (more flexibility) to avoid injuring the birds.

As an option, you have the possibility to take a locksmith panel (2x1m) to put at the bottom of the partridge pre-release cage (ref 701821) to prevent predators from entering.

The pre-release cage allows to manage the partridge restocking.

It is necessary for a reinforcement of a population or for a re-establishment in order to increase the densities of partridges on a territory.

In addition to these amenities, agronomy has a very important role to play in fixing a population in an area.

The level of predators is incompatible with the increase of small game populations, their regulation is essential, you can consult our trapping equipment.

There are also shelters called anti-busard frames that allow partridges to protect themselves from raptors.

Find out more about partridges :

The partridge is a stocky bird with short tail and wings, it weighs between 350 and 400g. It is remarkable for its flight and plumage. There are several species of partridge, the most common in Europe are : the grey partridge and the red partridge.