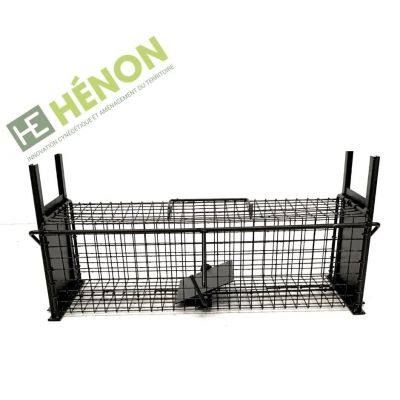 This type of rat trap is also called rat cage, dobby or rat trap. This trap is a very good alternative to rat poison, since it does not pollute and does not represent any risk for other animals and your children. In addition, the two-entry rat trap captures without killing the animal or even injuring it.

This model has two entrances, positioned on a place of passage along a wall or a fence, it allows you to capture the rat no matter which side it comes from.

Its small doors prevent the capture of backyard animals, so this rat trap can be placed in parks, henhouses or aviaries.

The two doors close simultaneously, when the rat passes over the pallet, it is trapped and can no longer come out. It is an extremely practical trap! Anyone can use it and it is extremely easy to set. Moreover, it does not represent any danger for other animals around or for children passing by.

Even if this rat trap has two entrances, nothing prevents you from using a bait to increase the chances of success. To do so, simply place a bait in the middle of the pallet. Be careful not to place it on the side because the rat could enter the trap without activating the trigger paddle. So to make the rat trap more attractive, place a bait (cat food, bacon...) on the pallet. To give the rat confidence, you can put some food on the pallet, removing the doors, to get it used to entering the trap. As soon as the food disappears regularly, you can put the doors back on and arm the cage.

It is advisable to handle the rat trap cage with handling gloves, to avoid the transmission of diseases. Rats can carry leptospirosis, a disease that can be serious for both humans and animals.

You are annoyed by rats and you hesitate between a single-entry rat trap and a double-entry one... Don't worry, both are equally effective! The difference is only at the level of the installation of the trap. A one-entry trap is better suited to put a bait in the bottom, while a two-entry trap will be more effective along a wall for example. It all depends if you prefer to use a bait and if the rats run along the walls in your home. Finally, if you are still hesitating, know that we also sell a lot of 2 rat traps 1 entry + 2 rat traps 2 entries; so you will have four traps of two different kinds, so much to say that you will have a lot of choice !

How to recognize a rat ?

The gray rat also called overmouse, brown rat or sewer rat is a nocturnal rodent. It measures about 25 centimeters and its tail about twenty centimeters, so it is smaller than its cousin the black rat. But the best way to find out how to get rid of rats is to go to the Hunter's Diary. There you will find tips and tricks to trap the rat.