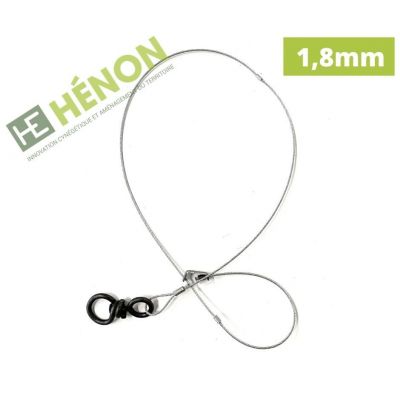 The snare trap is used to capture foxes. We talk about capture because a snare trap does not kill the animal, it is approved so that the arrester takes the fox prisoner but does not strangle it. The snare trap is mainly used on trails and coulees. Trapping is a relatively complicated activity so there is no need to look for difficulty, quite the contrary! It is necessary to choose simple operating methods such as the snare trap. From year to year, it is often the same passages that are used by foxes, for example wide ditches or large embankments.... The main difficulty in trapping in open areas is to be as discreet as possible with regard to the animal of prey.

For more details on how to set the snare, we advise you to follow the advice in this blog.

When setting your snare trap, think about body odour. To do this, do your own preparation to avoid having several smells from different people. Indeed, if there are several people for the same snare trap, the pin will be wary. It is necessary that the fox, whose distrust and sense of smell are the two strong points, associates your smell with that of the meat. This will give him confidence and you will have a better chance of catching him and that he doesn't avoid the snare trap. It is best to prepare everything you will need before going to the site so that you can go very quickly at the time of installation and change the environment as little as possible.

You can find further information on the description of our collar trap in diameter 12 or 2.25.