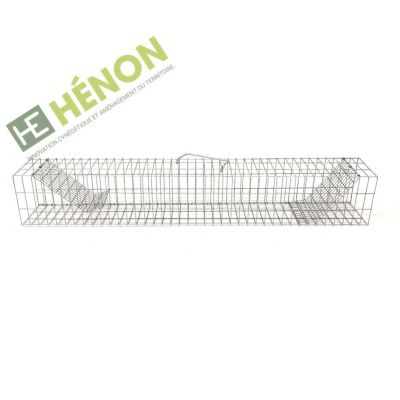 The muskrat is an invasive species that digs galleries, degrading banks, dykes, ditches and weakens the roots of trees.

Cage specific to muskrats to be used in burrow exits or in pipes used by muskrats.

Tunnel equipped with 2 entrances and double flap, made of galvanised wire mesh.

This muskrat basket is equipped with a carrying handle, to make it easier to pick up the cage once the animal is captured. It is advisable to handle the rat trap with handling gloves, to avoid the transmission of diseases. As a reminder, rats can carry leptospirosis, a disease that can be serious for both humans and animals.

This muskrat trap comes in the form of a cage, which makes it possible to catch the animal without killing it. This model has two entrances and a central compartment.

It's a multi-stakeholder trap, it allows you to catch several muskrats at the same time.  Indeed, the animal attracted by the bait pushes the trapdoor, which closes behind it. There is no need to rearm the muskrat trap, several rats can be trapped.

In the center of the trap a round compartment allows to put a vegetable bait (apple, carrot, corn...) to make the cage more attractive.

The muskrat trap can be placed in the escape routes, large-diameter pipes, ditches, and the edge of a pond in semi-submerged (it is forbidden to immerse it completely).