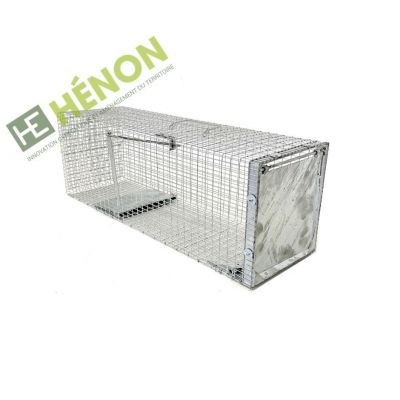 By buying this product you can collect up to 9 points. Your cart will total 9 points that can be converted into a voucher of €1.80.

Do you have problems with coypu ? The coypu trap is an effective solution for the trapping of this species.

Offering safety features for both you and the animal, this trap is made entirely of metal, hot-dip galvanized to guarantee great durability. This trap is made in France in our workshops, tested and used by many trappers. Measuring 27cm long, it is perfect for capturing the most common pests in France.

This 1-entry coypu trap is mainly used for trapping coypu, which is a very invasive animal and can cause damage in wetlands.

The door of the trap is locked by a piton, which allows you to turn the cage over without opening it.

The coypu is lured to the bottom of the cage with a vegetable bait: apple, carrot, corn cobs.... Once inside the cage, it triggers the pallet (located at 2/3 of the compartment) by walking on it, the door folds down as soon as the pallet has tipped over.

The coypu trap can be used in any place frequented by coypu or muskrats.

Thanks to its carrying handle, you will be able to easily move your trap to place the trapped animal in a new environment, without taking the risk of being bitten.

Be careful, however, when handling the coypu trap, wear handling gloves to avoid any possible injuries or bites. Even with a dedicated handle for transport, precautions must be taken.

How to recognize a coypu ?

It is a rodent that weighs between 3kg and 9kg, and measures between 40cm and 60cm.

It is therefore more imposing than the muskrat. The coypu is also distinguished by its 4 large orange/red incisors and the section of its round tail which can measure up to 45cm.

Its fur is mainly brown and red.

The coypu trap will be particularly effective at night because it is at this time that the coypu feeds. Its food consumption is mainly based on plants and small molluscs. It eats a lot, destroys nests and can transmit diseases.

Today, it is present in more than 70 French departments and causes a lot of damage. The coypu trap is the ideal and very effective way to fight against these pests.