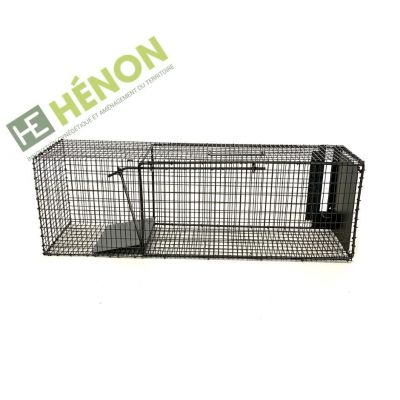 By buying this product you can collect up to 7 points. Your cart will total 7 points that can be converted into a voucher of €1.40.

Presentation of the Coypu Box :

This type of box with 1 entrance is a coypu trap used for trapping the coypu, a very invasive animal and likely to cause damage especially in wet areas.

This coypu trap is designed to be used wherever coypu are found. It can also be used to trap muskrats or other pests such as raccoons for example.

The coypu trap is equipped with a carrying handle, and it is painted green to be more discreet and this allows the coypu trap not to rust.

French manufacturing in our workshops

All you need to know about the coypu:

The coypu is a rodent native to Latin America. It was introduced in Europe in the 19th century and has proliferated in almost all regions of metropolitan France. The coypu can cause real damage on the banks, which is why it is important to trap it. To know everything about coypu trapping, which baits to use, how to set your coypu trap, etc... You will find all the advice on the Hunter's Diary in the article "How to trap the coypu".

The Coyote Box is an easy to use coypu trap. It is designed to be placed wherever you find coypu. It is very easy to set and all you have to do is place bait in the bottom of your coypu trap to get the coypu to come in. It's a trap that doesn't kill: it captures. It is a so-called "first category" trap, meaning that it can be used by anyone, and there is no need to have passed any trapper training to use it.