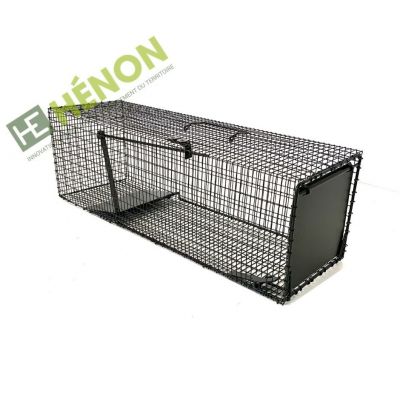 By buying this product you can collect up to 5 points. Your cart will total 5 points that can be converted into a voucher of €1.00.

This coypu trap box is said to be "economical" because it has a simple low frame that maintains the release.

This type of box with 1 entrance is used for trapping the coypu (Myocastor coypus), a very invasive animal.

The animal is attracted to the bottom of the coypu trap box by a vegetable bait: apple, carrot, corn cobs...

It triggers the paddle (located at 2/3 of the compartment) by walking on it. The door folds down as soon as the pallet tips over.

The door of the coypu trap is condemned by a piton, which makes it possible to turn over the cage.

You can then turn the coypu trap over in the water without the door opening, to drown the animal.

This cage can be used in any place frequented by coypu or muskrats.

We remind you that it is preferable to handle this coypu trap with handling gloves to avoid any possible injuries or bites.

How to recognize a coypu ?

It is a rodent weighing between 3 and 9 kilos and measuring between 40 and 60 cm.

It can be distinguished from the muskrat by its larger size and by the section of its round tail that can measure up to 45 cm.

Its fur is reddish brown in colour.

It feeds at night on plants and does not disdain small molluscs.

Typical of aquatic environments, it is likely to cause damage in wetlands.

Today present in more than 70 French departments, it is recognizable thanks to its 4 large orange/red incisors.