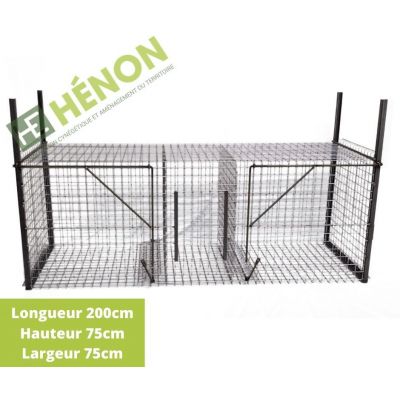 By buying this product you can collect up to 34 points. Your cart will total 34 points that can be converted into a voucher of €6.80.

Fox trapping is important to promote the small game population. The one-piece fox cage is mainly used for the capture of foxes. It is a capture trap that does not injure the animal, and therefore allows the fox to be released in case of a bad pick. The monobloc fox cage is positioned along your enclosures (henhouse, duck pen, ...) to protect your animals from the fox, and can be left stretched preventively.

Thanks to its central call cage, the monobloc fox cage allows you to put a live bait (without forgetting to put water and food) to attract the fox. Once retracted, the animal triggers the mechanism by placing its paw on the pallet, the door closes and the animal is trapped. The fox is a carrier of many diseases including alveolar echinococcosis which can be fatal to humans. This is why we advise you to always wear gloves when handling the animal or the one-piece fox cage.

This model also exists in 3 modules, easier to transport you can find it on our site: fox cage 3 modules

Recognizable by its red fur, its white spot under the neck, its fine muzzle and its pointed ears, the fox also called goupil is a carnivore, it feeds on voles, rabbits, small game eggs (partridge, pheasant, quail ...) it also attacks domestic hens. The fox is a very fearful and cunning animal that is difficult to trap.