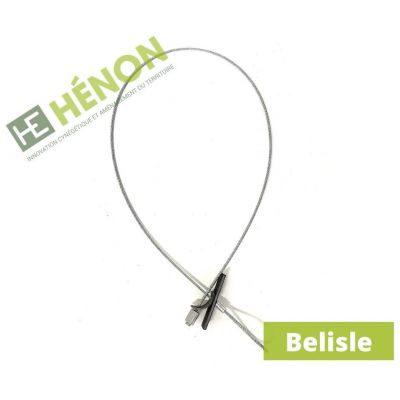 This lace is made for the use of the belisle trap and can also be used on the Albert trap. Our laces are made in France in our workshops and are of guaranteed quality. They are made from a metal cable perfectly adapted to the lace traps, and equipped with a "half moon" to avoid opening the lace after the fox has been caught. At the end of the lace, a loop is made so that you can attach your belisle lace to a swivel, a false mesh or a chain kit. For logistical and shipping reasons, the belisle trap lace is sold from three units upwards, thank you for your understanding.

Use your belisle trap :

The belisle trap is easy to use and adapts to any environment. It is an effective trap for trapping foxes, but it can also be used to trap raccoons for example. The belisle INOX trap as well as the selective belisle trap on sale at Hénon Shop are made by the manufacturer and inventor of the belisle trap, Candadian Benoit Belisle. This guarantees quality traps unlike other retailers who often sell very poor quality traps made in China or elsewhere in Asia. Our belisle traps are robust, efficient and made to last. The belisle trap is well known by hunters and trappers for its efficiency. Its small French cousin, the Hingiol trap follows the same philosophy and can be used as a belisle trap.

The red fox is a pest that can be trapped throughout the year. The belisle trap is perfectly adapted for fox trapping. But in addition to the belisle trap, you will find everything you need for fox trapping in the fox trap category. Other traps, such as fox cages, are easier to use than the belisle trap. Moreover, the use of the belisle trap requires trapper training and therefore the need to be an approved trapper. It all depends on your experience in fox trapping, but it also depends on the environment and the place in which you want to place your trap. If you want to know everything about fox trapping, but also interesting trapping techniques, the book The Secrets of 100 Fox Trapping Champions by Jean Berton can really help you. Finally, the Journal du chasseur also regularly publishes articles on trapping techniques, which can help you. Translated with www.DeepL.com/Translator (free version)