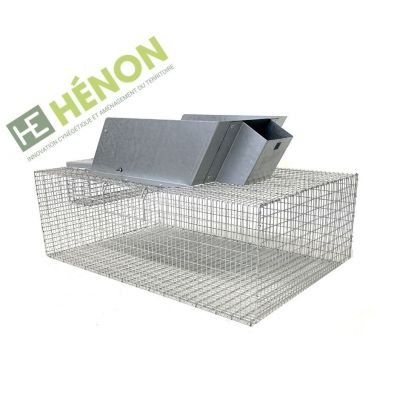 By buying this product you can collect up to 10 points. Your cart will total 10 points that can be converted into a voucher of €2.00.

If you wish to buy several Catiches, we advise you to buy the set of 3 Catiches, the shipping costs will then be offered to you.

Our advice for use

To use this coypu cage, you just have to place a bait in the compartment provided for this purpose. The coypu will be attracted by the bait and will climb on the rocking board. As it moves towards the bait, it gets closer to the tipping point and ends up falling into the cage. Because the rocker board is made of aluminum sheeting, the coypu (or muskrat) has no grip: it slips, cannot climb up and gets stuck in the coypu cage.

Which bait to choose: what works best to attract the coypu is to use pieces of carrot or apple... but also corn if for example in a corn field. Other baits can be used in this coypu cage, but carrots and apples are cheap and easy to use. For more tips and ideas on how to trap coypu and muskrat, we advise you to take a look at the Journal du Chasseur, it can be useful!

Where should I place my coypu cage?

It is a practical and easy to use trap. It can be placed just about anywhere, but as with many other coypu (or muskrat) traps, it is best to place it next to the water. Coyotes and muskrats live right next to water so you are sure to place your coyote trap if it is next to a watercourse. Also, when you go to raise your traps and catch pests, you can use the water to drown the coypu or muskrat.

In order for the coypu, but especially the muskrat, to climb on the rocking board easily, it is also advisable to make a small wooden ramp. You can use it to partially submerge the coypu cage. Be careful that the cage is not totally in the water because it is illegal.

This trap is a registered design.