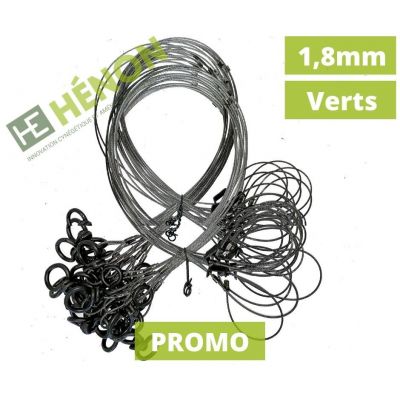 The fox snare is an efficient, easy to set up and inexpensive trap. It is also known as a snare with a stop, as a stop is placed on the cable to prevent the animal from strangling itself with it. This fox trap is not lethal, but you must have a trapper's licence number to use it.
Foxes often use the same passages, such as wide ditches or large embankments, and the snare trap is mainly used on footpaths or in runs.
The most difficult thing is to camouflage the trap, which is why this fox snare has been painted green to make it much more discreet.
If you want to know more about fox trapping, we advise you to follow the articles in the hunter's journal.


If the diameter does not suit you, you can also choose between 2mm or 2.25mm, which you can find in a promotional pack or individually: FROG COLLET

You can use your fox collar :

In a casting, in a manure pile on the plain, in a plough furrow In a deer passage, in a burrow, in a ditch crossing In a straw bale, on a fence

The snare trap can therefore be used in many situations, offering great flexibility. These techniques should be varied according to the seasons and the places where the animal passes.


First of all, avoid leaving your scent on your fox collar. But this also applies to any fox trap. The fox has a very good sense of smell, and will detect the smell of a human if you have not taken precautions, thus increasing its distrust.
It is therefore advisable to prepare your snare trap with handling gloves, which will also protect you from possible diseases that the fox may transmit.