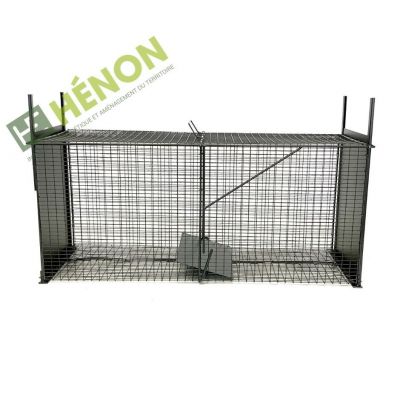 By buying this product you can collect up to 11 points. Your cart will total 11 points that can be converted into a voucher of €2.20.

The tawny box is a proven trap, which has been around for many years and will always be useful. It is effective in many situations and above all easy to use. It is in a way the "beginner's trap", one can try to trap any species, without danger for the animal or the trapper. If you place it well, it is the assured capture!

Here it is a tawny box with two entrances, which means that the animal can enter from any side, which can be very dangerous if you place your trap on a path. There is also the possibility to choose a tiger box with only one entrance, but one does not prevent the other. When you have one with two entrances, you can voluntarily decide to leave one side closed.

Lightweight, the tawny box will pose no problem when you put it up, or whenever you change its place. Moreover, at Hénon, a carrying handle is specially designed on the top of this trap, and this for any tawny box. This will facilitate the transport.

Place your trap in a place where the animal you want to trap usually passes, such as a coulée, but also along a henhouse, an aviary, an enclosure... Remember to put a bait in the middle of the tawny box in order to attract the animal inside. The animal triggers the trap by trying to grab it. This makes the sliding doors fall down and it is then trapped in the cage.

However, remember to wear gloves when handling the trap, especially when making a catch. Animals can carry diseases that can be transmitted to humans, which can make them dangerous, especially foxes that can transmit alveolar echinoccocosis.

All our traps are manufactured in our workshop in Pas-de-Calais, in order to assure you the best quality possible on this market. We pay special attention to meet all your needs. The tawny box is declined in many different formats, in order to offer you a wide choice. In some cases, we can make special requests.