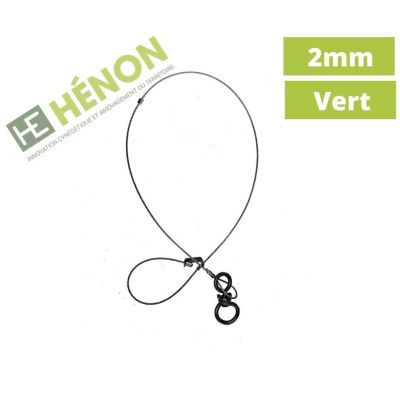 The blackened collar trap with a diameter of 2, also known as a snare trap, is designed for fox trapping. Its high versatility allows it to be effective in many situations:

The blackened collar trap has many advantages, a low price, quick installation and a very efficient mechanism. So you can set several traps efficiently. Unlike other snare traps, this one is blackened, giving it better camouflage in nature.

Don't forget that foxes are very cunning animals and can hardly detect the smell you put on the snare trap, so remember to use handling gloves. Also avoid leaving traces when you pass by.

What does the law say?

In France, the snare trap has a stopper that will prevent the trapped animal from strangling itself. They must be approved by ministerial decree after advice from the Conseil National de la Chasse et de la Faune Sauvage (CNCFS). Only approved trappers can claim the use of this trap, and this within a very strict regulatory framework. Snares are not authorised for hunting.