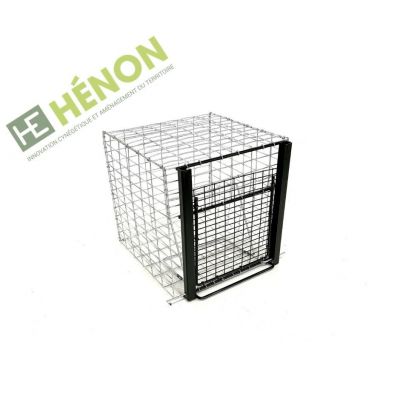 This pigeon trap is a small, robust and effective cage against these birds, including magpies. Contrary to our pigeon trap cage, this cage allows you to capture a smaller number of them. The pigeon trap has an entrance, the pigeon or magpie, once inside, will not be able to get out. As it works with "one door", this trap does not need to be tightened.

You can attract these birds in two ways in this pigeon trap:

By placing a pigeon (or magpie) in it, which attracts its fellow birds to enter in turn;

By putting a food, such as wheat for example.

Why trap the pigeon?

This bird is a source of problems for many municipalities. It is extremely present and proliferates a lot, because it finds everything it needs to develop. The pigeon can be a carrier of diseases, such as salmonella for example. However, it is mainly its droppings that pose a real problem (diseases are also carried by its droppings). A pigeon trap will therefore limit this dirt, which can be found everywhere, and it is sometimes risky to go on foot in certain places, for fear that a pigeon will do its business in flight at the exact moment a person passes by. It is therefore essential, in addition to the woodpeckers, to use pigeon traps in order to limit these birds in cities.

In addition to the cities, pigeons are also a problem in agricultural cooperatives, as they manage to get into the islands where the grain is stored. They also stain the cereals with their droppings, which we recall, do so in full flight. This bird has become a plague, it has adapted to urbanisation, so it is necessary to fight against it with an efficient pigeon trap.